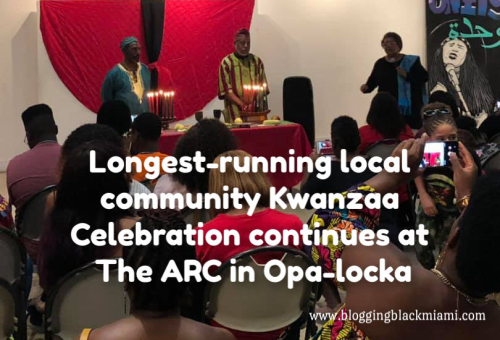 The Spirit of Kwanzaa lives in Miami-Dade County. On Saturday, December 29, 2018, it was demonstrated at The ARC (Arts & Recreation Center) in the beautiful City of Opa-locka, Florida. The 29th Annual Mary Williams Woodard Legacy Kwanzaa Celebration evolved into a true community event welcomed by various groups and entities beyond its local beginnings.

More than 150 people were in attendance as the traditional procession of the Council of Community Elders was announced via drummer Jah Will B. Elders are not recognized because of age but due to their contributions to the community. Many are often unsung heroes. This year’s elders included Chief Nathaniel B. Styles Jr. who also served as event MC; HRH Iya Orite Adefunmi; School Board Member Dorothy Bendross Mindingall; Bernadette Cecelia Poitier; Rubye Howard; Thomasina Turner-Diggs; Eric Pettus; “Broadway” Cuthbert Harewood; James Wright; Amare and Amani Amari; Netcher Hopi Mose and Angela Berry.

Because of construction at the African Heritage Cultural Arts Center, where the event has been presented for many years, its consecutive presentation would have been interrupted were it not for Opa-locka Vice Mayor Chris Davis; Nakeisha Williams and the Opa-Locka CDC; and Nakia Bowling of Zoe’s Dolls.

As is customary, the Nguzo Saba, Seven Principles of Kwanzaa and symbols of Kwanzaa were explained with the assistance of audience members and the Ivy Rosettes of Gamma Zeta Omega Chapter of Alpha Kappa Alpha Sorority who also served as hostesses. Tracey Jackson delivered the welcome on behalf of the Miami-Dade Chapter of the Florida A&M University National Alumni Association. Remembering those who have transitioned is an important aspect of Kwanzaa. Dr. Natasha C. Stubbs delivered a moving recognition of local and national individuals who became deceased since last year’s Kwanzaa event. Entertainment was provided by the Next Generation Dance Academy and poets Rebecca “Butterfly” Vaughns and realproperlike. New World School of the Arts junior, Nicholaus Gelin, serenaded attendees with his trumpet during the feast portion of the evening.

“We enjoyed the event,” said a mother who traveled from Coral Springs with her son and his best friend to attend the celebration. They said they will attend next year and the boys want to participate on the program.

The Kwanzaa Celebration is hosted by the Miami-Dade Chapter of the FAMU Alumni Association, the Dr. Arthur and Mary Woodard Foundation for Education and Culture; and Osun’s Village African Caribbean Cultural Arts Corridor.