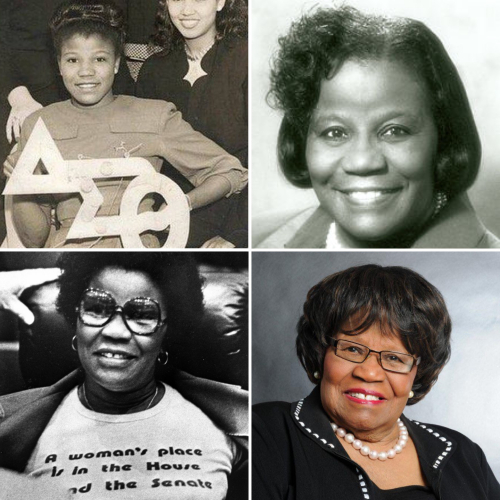 Happy Birthday to one of the true living legends of Florida history, the Honorable Carrie P. Meek!

The daughter of Willie and Carrie Pittman, Former Congresswoman Carrie Pittman Davis Meek was born on April 29, 1926, in Tallahassee, Florida. Her grandmother was born a slave in Georgia. Her parents began their married life as sharecroppers. Her father would later become a caretaker and her mother, a laundress and owner of a boarding house. The youngest of 12 children, Meek grew up in segregated Tallahassee, Florida. An honors student and track & field star athlete, she graduated from Florida A&M University (then Florida A&M College) in 1946 with a bachelor's degree in biology and physical education. At that time, Blacks were not allowed to attend graduate school in Florida. The state of Florida paid her graduate school tuition for her to go north to continue her studies. She graduated from the University of Michigan in 1948 with a Master's degree in public health and physical education.

After graduating from the University of Michigan, Meek was hired to teach at Bethune-Cookman University (then Bethune-Cookman College) in Daytona Beach, Florida, and then later at her alma mater, Florida A&M University. She moved to Miami in 1961 where she served as a professor, administrator, and special assistant to the vice president of Miami Dade College, then Miami-Dade Community College. The school was desegregated in 1963. Meek played a central role in pushing for integration. Throughout her years as an educator, Meek was also active in community projects in the Miami area.

Meek was elected Florida state representative in 1978. She would go on to make history as the first Black female elected to the Florida State Senate in 1982. As a state senator, Meek served on the Education Appropriations Subcommittee. Her efforts in the legislature also led to the construction of thousands of affordable rental housing units.

In 1992, Meek was elected to the U.S. House of Representatives from Florida’s 17th Congressional District. This historic election made her the first black lawmaker to represent Florida in Congress since Reconstruction. Upon taking office, Meek faced the task of helping her district recover from Hurricane Andrew’s devastation. Her efforts helped to provide $100 million in federal assistance to rebuild Dade County. Successfully focusing her attention on issues such as economic development, health care, education and housing, Meek led legislation through Congress to improve Dade County’s transit system, airport and seaport; construct a new family and childcare center in North Dade County; and fund advanced aviation training programs at Miami-Dade Community College. Meek has also emerged as a strong advocate for senior citizens and Haitian immigrants.

Meek has received numerous awards and honors. She is the recipient of an honorary doctor of laws degrees from the Florida A&M University, University of Miami,  Barry University, Florida Atlantic University and Rollins University. The Foundation that carries her name focuses on improving the lives of individuals in Miami-Dade County and throughout the broader community of  Florida.

We are delighted to join family and friends in celebrating the ninety-three years of awesomeness of the legendary Carrie Pittman Davis Meek and wish her many more.

[Biography adapted from The History Makers and U.S. House of Representatives History.]