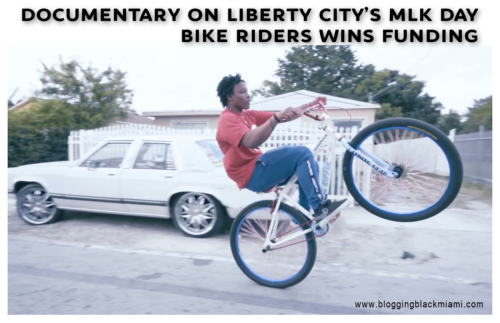 Munroe received $14,000 from Oolite Arts to produce the documentary “These Kids This City,” which he began to shoot during the 2019 Martin Luther King, Jr. Day celebration. This year, some of the bike riders, who were protesting redevelopment in Liberty City, were confronted by an angry man on the Brickell Bridge, who threatened them with a gun and racial slurs, and was ultimately charged with a hate crime.

“Growing up in Miami, I was always curious about this movement. Why Liberty City, and why on Martin Luther King, Jr. Day? I’ve always seen it depicted negatively by the media, so this year I set out to see this movement first hand and to answer these questions for myself,” Munroe said. “In light of the hate crime and the viral video that captured it, this movement has been catapulted into the national spotlight.”

Munroe pitched his idea before a live studio audience and a jury of national and local film professionals for The Block, one of the ways Oolite Arts seeks to build a pipeline of local filmmakers. With stories from Hialeah to Westchester and the waters off Coconut Grove, each of the finalists received a cash prize for their film – with a total of $32,000 invested in the documentaries.

“Miami is a city of stories, and winners of The Block are helping to shine a light on them all over our county. We’re delighted to be able to give them the support they need to bring these stories to our screens,” said Dennis Scholl, Oolite Arts’ president and CEO.

"By supporting these filmmakers, we're supporting the communities whose stories they're sharing,” said Jason Fitzroy Jeffers, Oolite Arts’ Cinematic Arts program manager. “Homegrown films such as these allow us to understand ourselves and our neighbors across Miami more deeply."

The other winners, and their award amounts, are as follows:

What is it like to come of age on an island threatened by the effects of climate change? A group of Normandy Isle children explore their own future, by reconstructing an exact replica of their neighborhood on the gaming platform Minecraft. In this virtual world, the children rehearse future scenarios of climate change-induced disasters, in a telling re-enactment of their own trauma following Hurricane Irma. The mixed media documentary “Isle of Mine” will provide a way for them to express their feelings about the future, while imagining other possible solutions and outcomes for their hometown.

Every two years on a summer Saturday, the descendants of Seminola’s original settlers gather at the Hialeah neighborhood’s central green for Cotson Day, a celebration of community and history. Once a vibrant community of about 2,500 African Americans, the neighborhood has been decimated in recent years. The film will document this history, and follow past and current residents preparing for the big day.

For more than 30 years, 500-plus residents have called the mooring field and anchorage off Dinner Key Marina home. After monster storm Irma shredded docks and sank boats in 2017, landlubbing city officials left the community bobbing in disrepair. In “Mooring,” Mike and fellow liveaboards will reflect on the current state of the neighborhood and its storied past, and face the precarious future of their unique community.

El Afilador– the knife sharpener – drives around the neighborhood in what appears to be an ice cream truck, complete with its own jingle. Yet a muffled voice blares from the speakerphone, offering the man’s services as a knife sharpener. To those not from the Westchester area, it sounds unusual. Why is this man sharpening knives in his truck? Locals know the man has brought a humble blue collar job from Cuba to the United States, and is, just like everyone else, trying to make a living.

In addition to the five finalists, the following filmmakers earned a special jury mention for their submissions, and will receive $1,000 for their projects: Daniel Rivero, Vanessa Charlot, Nicole Martinez, Alicia Edwards, Nadia Tahoun and Matthew Abad.

The Block is part of Oolite Arts’ new Cinematic Arts Program, which provides training and opportunities for local filmmakers, including a Cinematic Arts Residency which offers funding for filmmakers to make a microbudget narrative film.