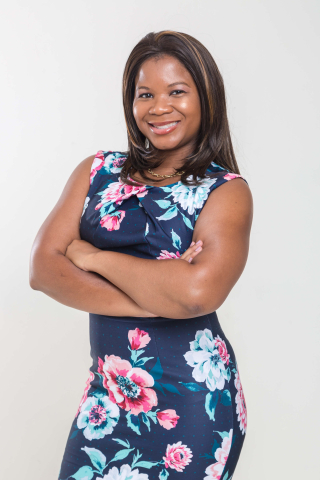 WASHINGTON – The Mid-Atlantic Black PR Society will honor Howard University Director of Public Relations Alonda Thomas as the Communicator of the Year during the organization’s annual PowerPR Conference on Friday, November 1, in Philadelphia. The award will be presented to Thomas by Mid-Atlantic Black Public Relations Society Founder Monica Peters and Actor Nakia Dillard, who stars in the CW series, “Black Lightning.”

“Alonda is most deserving of this award” says Peters, who describes the Society as a "small but mighty organization."

“Alonda has showcased Black excellence in her career trajectory from author to public relations executive, strategically shaping the image and brand of one of the most prestigious HBCU’s in the nation, Howard University.”

Thomas, who was previously named “Top 25 African American PR Millennials to Watch” by Huffington Post, will also serve as the conference’s keynote speaker. Prior to her current role, Thomas served as the senior public relations manager for TV One. In addition, she has developed PR strategies for Walt Disney Studios, ABC Studios, Bishop T.D. Jakes and more.

“I’d like to thank the Mid-Atlantic Black Public Relations Society for this incredible recognition,” says Thomas. “This would not be possible without the support I’ve received from some amazing mentors over the years while working at Howard University, TV One, Liquid Soul and Florida A&M University. They challenged me to lead with authority and pursue excellence, which I strive to achieve every day.”

Tickets are still available to join the Mid-Atlantic Black PR Society, a project and community partner of FNC Philly, a 503(c)(3) for the annual PowerPR Conference: "PR BREAKTHROUGH: IN IT TO WIN IT!" November 1 at Hilton at Penn's Landing, 201 South Christopher Columbus Boulevard in Philadelphia.  The organization's mission is to serve as a venue and resource for African-American public relations professionals, students and entrepreneurs.

Attendees can register for the conference at bit.ly/midatlanticpowerpr.

Actor Nakia Dillard will also participate in the conference's entertainment panel along with celebrity chef Kenneth J. McDuffie in the "Manage the Brand in Entertainment"

Alonda Thomas, Communicator of the Year, Director of Public Relations for Howard University

Shawnee Brown, Associate Director, Global Social Media Strategy for Merck Pharmaceuticals Merck Manuals (Trailblazer Award for being one of the few Black women in the world to head up social media operations and strategies for a global pharmaceutical corporation.)

Diana Torralvo Director of Community Relations & Communications for NBC10 & Telemundo62 (Ally Award for being a consistent supporter of the Black PR Society.)

Previous Communicator of the Year Award honorees include: Stephanie Humphrey (2017), tech contributor for Good Morning America and Kenny Johnson (2018) from the Phillies, who will be returning to the conference this year.

New Orleans, LA – Xavier University of Louisiana has been awarded candidacy for the accreditation of its new masters program in Speech-Language Pathology by the Council on Academic Accreditation in Audiology and Speech-Language Pathology(CAA).  The addition of this program brings the number of master’s degree options now offered by Xavier to 14, the others being in the areas of education, public health, and theology.

The new Master’s program in Speech Language Pathology will play a significant role in the university’s efforts to respectfully and compassionately address the speech, hearing, and language difficulties across diverse communities.

The CAA’s evaluation was based upon a thorough review of all candidacy materials for the program including the application, site visit report, and the program’s correspondence throughout the review period. The organization determined that the new program demonstrated sufficient compliance with the Standards for Accreditation as outlined in the Standards Compliance Continuum.

The mission of the new Master’s program is to produce professionals who are clinically competent as defined by the American Speech-Language-Hearing Association (ASHA) to meet the needs (i.e., prevention, identification, treatment) of individuals who are currently experiencing communicative disorders or differences, as well as those who are at-risk of such problems within and across diverse communities, settings, and contexts.

“Exposure to individuals from culturally and linguistically diverse communities during training is essential for professionals to become competent in recognizing and addressing the unique needs of underserved populations,” said XU Senior Vice President and Provost Dr. Anne McCall said. “The program will create a culture of evidence-based educational and clinical practices among its faculty, staff and students and will reflect the department’s long-standing core values of compassion, professional excellence, community engagement and life-long learning.”

“Professionals graduating from the new program at Xavier will be provided with special training that will equip them in four key areas including implementation of evidence-based, case centered care, knowledge and sensitivity about cultural and linguistic diversity matters, interprofessional collaboration/team case management skills, and knowledge and practical experience with working at the top of the profession,” said Speech Pathology Department Chairperson and Graduate Program Director Dr. Gloriajean Wallace.

Wallace said that students will also be exposed to social justice matters and social determinants that impact communication disorders.

“Twenty-one students who are currently enrolled in Xavier University’s Master of Science Speech-Language Pathology Program are expected to graduate in 2021 which is why we coined the slogan 21 in 2021,” Wallace added.

As an addition to the new program, the department also announced the opening of Xavier University’s newly renovated Speech and Hearing Clinic that will also provide speech, language, cognitive and hearing screening assessments for residents of the Greater New Orleans Community. The clinic is designed to provide training opportunities for the program’s new Master of Science Speech-Language Pathology students. The clinic will open this October, offering speech, language, swallowing and hearing habilitation and rehabilitation services to adults and children who have a variety of communication disorders. This includes developmental speech and hearing disorders for preschoolers through young adults.

The clinic will also offer services for people with fluency and voice disorders as well as communication and swallowing disorders resulting from medical conditions such as stroke, traumatic brain injury, Alzheimer’s disease and other neurological diseases such as Parkinson’s Disease and Multiple Sclerosis. The Clinic plans to eventually expand to provide services in rural and international locations. Clinical services will be provided by students who will be supervised by Speech-Language Pathologists who are certified by the American Speech-Language-Hearing Association (ASHA, CCC-SLP) and Board certified by the Academy of Neurologic Communication Sciences and Disorders (BC-ANCDS).

Although the deadline to apply for the fall 2019 semester has passed, Xavier is now accepting applications from prospective students who are interested in pursuing the new master’s degree program for the fall 2020 semester.  Admission is open to applicants who hold a bachelor’s degree from a regionally-accredited college or university with a minimum 3.2 GPA in your field of study. Minimum combined GRE score of 280 (combined Verbal Reasoning and Quantitative Reasoning). Applicants are also required to submit three letters of recommendation, and a personal statement on why they have chosen the program.  Applications (and more information relating to admissions) are available at https://gradapply.xula.edu/register/inquiry.