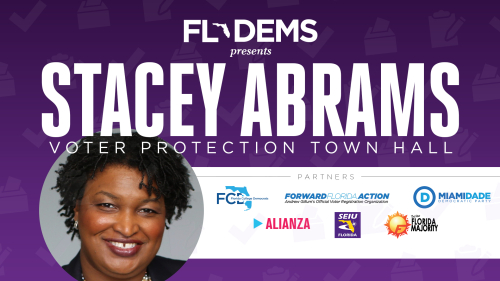 We are less than two weeks away from the deadline to be registered to vote in Florida’s presidential preference primary in March. Former Minority Leader of the Georgia House of Representatives Stacey Abrams will be in Miami today for a Voter Protection Town Hall at Miami Dade College North Campus at 2 pm.

Florida is the election battleground for 2020. Voting rights are under blatant attack by Florida Gov. Ron DeSantis and the Republican-led Legislature. From ignoring the will of the people regarding Amendment 4 and the restoration of voting rights of four million Floridians to suppressing the youth vote on college campuses by establishing law making it difficult for colleges and universities to host early voting sites.

Stacey Abrams is coming to help kick off a series of Voter Protection events. Voter protection is all the more important when considering the razor-thin vote margins that determined several Florida  races.