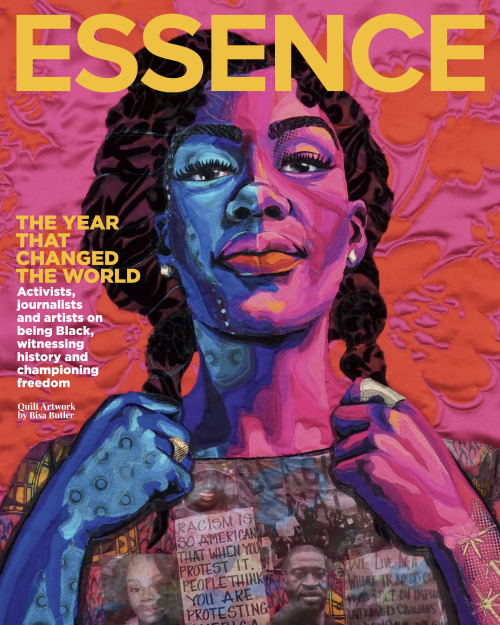 Striking Cover Image is a Visual Interpretation of the Challenges and Triumphs of the Black Community After Facing an Unprecedented Year Filled with Social Unrest, Police Brutality, Economic and Health Disparities, COVID-19 and More

The news of Derek Chauvin’s guilty verdict in the murder of George Floyd has caused many to reflect on the seemingly endless challenges—and endless hope, fight and resilience—that the Black community has experienced and demonstrated, particularly over the past year. Chronicling “the year that changed the world,” ESSENCE—the leading and only 100% Black-owned media, technology and commerce company at scale dedicated to Black women and communities—today debuted its May/June 2021 issue cover as a striking visual interpretation that juxtaposes the challenges and triumphs of a community after an unprecedented year of heightened social and political unrest, police brutality, economic and health inequities, COVID-19 and more. The quilt artwork cover, created by contemporary artist Bisa Butler and commissioned exclusively by ESSENCE, is one-of-a-kind and the first-of-its-kind used by ESSENCE for a cover in its more than 50-year history.  Butler is widely recognized for her depictions of African-American identity and life in the American experience, combining portraiture and the highly skilled craft and tradition of quilting to deliver engaging pieces that spark dialogue.

“Some events are so defining that they continue to transform generations long after they occur, and such have been the collective events of the past year,” said Latraviette D. Smith-Wilson, Chief Strategy & Engagement Officer, ESSENCE.  “Whether those sworn to protect us having no regard for our lives, health and economic disparities heightened under a global pandemic, violent attacks on the U.S. Capitol and American democracy and more, we have witnessed a deluge of inhumanity that has only been rivaled by the resilience of our humanity.  This is what our incredible team has captured throughout the pages of ESSENCE’s  May/June Issue and what we are so honored that Bisa Butler has visually interpreted through the colors, textures, fabrics and patterns of this amazing quilt artwork—the first of its kind for an ESSENCE cover. Each stitch tells the story of these times and threads together the narrative of the work left undone and the future of social justice and racial equity that we must create.”

ESSENCE’s ongoing focus on social justice, economic inclusion and equity issues will be highlighted this week in its upcoming airing of the 2021 ESSENCE Black Women in Hollywood Awards, on ESSENCE.com and ESSENCEStudios.com this Thursday, April 22. Building on its years of providing platforms to ensure Black creatives were recognized when others ignored them and that they continue to “receive their flowers” for their contributions to Hollywood and global culture, this year’s experience, with the theme “Mastering Our Stories,” will focus on the resiliency of Black women in Hollywood through the years—including during the unprecedented pandemic.

ESSENCE’s May/June issue will hit newsstands on Tuesday, April 27. For more on this issue, visit ESSENCE.com.