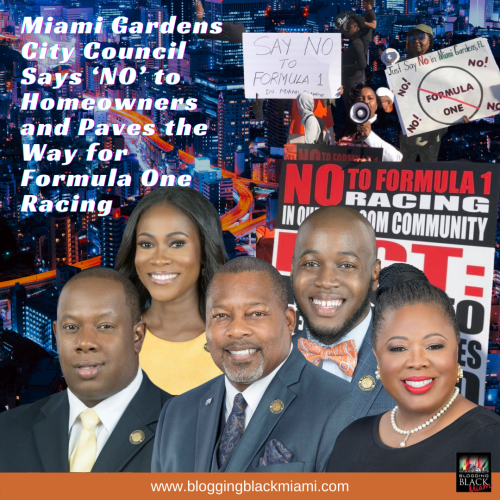 On this past Wednesday evening, by a 5-2 vote, despite significant constituent opposition, the City of Miami Gardens Council followed through on what residents feared. They reversed the decision of last year’s council and voted in favor of a resolution that paves the way for Formula One Grand Prix racing to be held in Miami Gardens for at least a decade starting in 2022.

Public comments at the council meeting were overwhelmingly in opposition to bringing Formula One racing to Hard Rock Stadium. There were reminders about environmental concerns, noise, and the vague promises delineated in the resolution. Individuals who spoke in support of the resolution had business ties to Stephen Ross and the Miami Dolphins organization. Owners of small, black-owned businesses shared testimonials on how the Miami Dolphins organization made it possible for them to operate during the pandemic.

The last two in-person commenters at the council meeting, Shirley Gibson, the first mayor of the City of Miami Gardens, and Barbara Jordan who served as Miami-Dade County Commissioner for 16 years, brought out some crucial points on why the resolution and Formula One are detrimental for Miami Gardens.

Mayor Gibson also advised the council to read the resolution, especially the threat to the future of the Jazz in the Gardens concert weekend for which the city has earned international notoriety. “Jazz in the Gardens is not worth what we are going to lose,” said Mayor Gibson. She also reminded the council, as did others, that $5 million over a decade is not a lot of money.

Commissioner Jordan pointed out the unrealistic financial benefit to the City since many of the Formula One patrons would likely be shuttled to Hard Rock Stadium and spend their money in the all-inclusive stadium environment rather than patronize surrounding small businesses in Miami Gardens.

Despite last year’s unanimous council vote rejecting Formula One, it was a foregone conclusion when Mayor Rodney Harris introduced the proposal via mainstream media that a sufficient number of council member votes had already been secured for its passage. Many residents questioned what changed since then. It would be easy to blame it on new members to the council, but two of the four new council members voted no - Shannon Campbell and Shannan Ighodaro. The remaining two new members - Linda Julien and Robert Stephens and the three veteran members - Mayor Harris, Vice Mayor Reggie Leon, and Katrina Wilson voted yes.

It’s not lost on observers that Stephen Ross and the Miami Dolphins organization made smart, strategic moves that used black people to represent them and speak in favor of Formula One, thereby placing the all-black governing council of the City of Miami Gardens in the precarious position of direct conflict with their constituents who are also mostly black.

I caution you to think critically and be careful as news is reported about this situation. Some media outlets reporting on the issue will have you believe the Miami Gardens homeowners are unreasonable. Still, the devil is in the details of the resolution the council eventually approved.

It’s embarrassing that a majority-black-led city would accept the trinkets, yes, trinkets as Commissioner Jordan referred to them, it will receive from multi-billionaire Stephen Ross and almost grovel when speaking of the Miami Dolphins philanthropic community endeavors as if they are the only organization feeding people in need. Like many businesses who do the same, they also write these donations off on their income taxes. No doubt, the gifts that were supposed to be given freely actually came at the cost of some folks integrity or exposed their lack thereof.

It would be a mistake for Stephen Ross, the Miami Dolphins organization, and anyone else to think the homeowners, UP-PAC and the NAACP will quietly accept this latest vote. Stay tuned.

Formula One: The Racing Event that Refuses to Accept “No” from Black Homeowners