Blogging Black Miami
Miami Gardens City Council Says ‘No’ to Homeowners and Paves the Way for Formula One Racing
Beacon For Change Receives 21 Computers and 14 Projectors for The Beacon School in Freeport, Grand Bahama 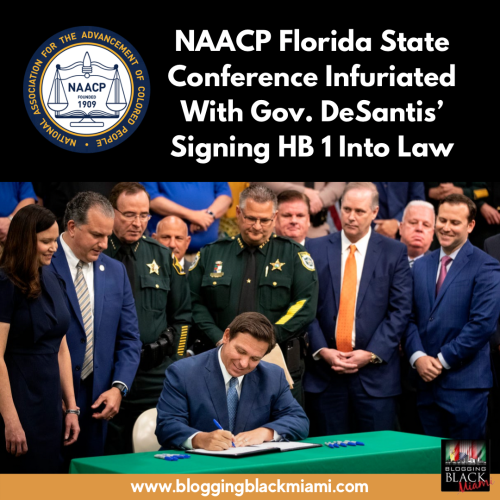 NAACP says this proposal is racist and discriminatory for black and brown Floridians.
Yesterday, Florida Governor Ron DeSantis signed HB 1, his censorship and repression bill, into law as America awaits a verdict in the trial of former Minnesota police officer Derek Chauvin for the murder of George Floyd. The bad optics, but likely intentional timing, and an all-white contingent of supporters in the background at his press conference in Winter Haven, sends strong messages on who this bill targets.
“Today is a sad day for Florida. The Governor signed H.B. 1 into law. The bill is racist, discriminatory, unwise, unlawful, and unjust. The Governor put his stamp on this discriminatory law filled with criminalization and civil rights disenfranchisement aimed at Black and Brown Floridians. We won’t sit silent on this issue and we won’t let this stop peaceful protests across the state of Florida,” says Adora Obi Nweze, President of NAACP Florida State Conference and member of the National Board of Directors.
HB 1 is effective immediately.