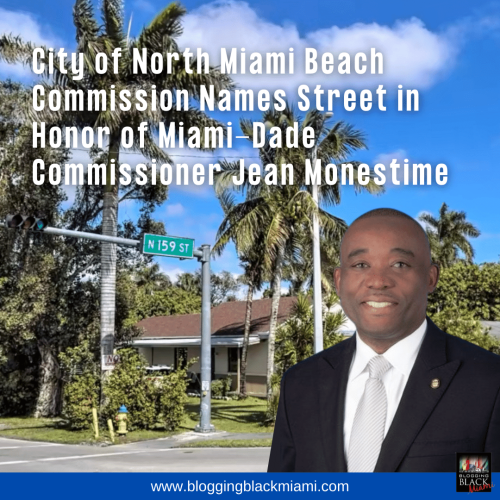 NORTH MIAMI BEACH, FL __ The North Miami Beach City Commission has voted to name Northeast 159th Street in honor of Miami-Dade County Commissioner Jean Monestime for his advocacy and trailblazing leadership in the community.  The Commission voted unanimously to name the road from West Dixie Highway to Northeast 8th Avenue "Jean Monestime Street," making it one of the longest roads named after a Haitian American in South Florida. Commissioner Michael Joseph was the prime sponsor of this resolution, and  Commissioner McKenzie Fleurimond was the co-sponsor.

"The City wanted to recognize Commissioner Monestime for his leadership, vision, and longtime support of our community's quality of life. May is Haitian Heritage Month, which makes the timing of this honor especially meaningful," Commissioner Joseph said.

Commissioner Monestime represents District 2 on the Miami-Dade Board of County Commissioners, which includes parts of North Miami Beach. He is the first Haitian American to serve as a Miami-Dade County commissioner and the first to serve as its chair. He is also in his last tenure of office due to term limits.