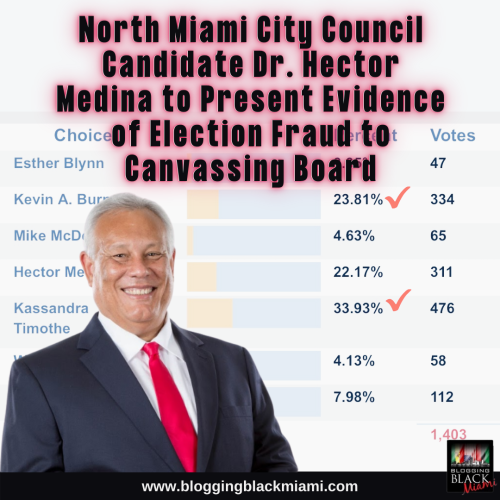 Burns, a former North Miami mayor, is in a runoff race against Kassandra Timothe, scheduled for June 1, 2021. Medina will present evidence of fraudulent voting to the Canvassing Board this morning and ask them to postpone certification of the election results until after an investigation has been conducted.

The basis for Medina’s protest is the following, verbatim:

● There were 19 votes cast in the election by voters who only very recently registered as having an address in the City of North Miami. Upon visual inspection on May 13, the addresses where some of those who voted claim to be living appear vacant. As such, there is a strong likelihood that at least some of these voters participated in a coordinated vote fraud scheme facilitated by one of the candidates and/or their campaigns.

● There were 12 votes cast by mail from voters that have been identified as “Deceased” by the NGPVAN VoteBuilder voter database that was used by my campaign. While this database is not perfect, the high number indicates a very high probability that one or more votes were mailed back on behalf of a deceased voter, in violation of Florida law.

● Combined, the number of potentially fraudulent votes identified is up to 31, which exceeds the number of votes by which the unofficial count suggests I was eliminated or defeated from this race.

● In addition to these specifically identified votes, a statistically improbable number of voters cast their ballots by mail in Precinct No. 148. Data from the Supervisor of Elections suggests at least 348 ballots were cast by mail in this precinct, a nearly 75% increase on the 200 votes by mail that were cast in the regular municipal election in this precinct just two years ago. The lion’s share of that vote-by-mail spike is clustered in four high-rise buildings with shared mail facilities susceptible to mail ballot theft. By comparison, the total number of mail-in ballots received in 2021 vs. 2019, when all of the city’s districts are averaged, only went up around 21%.

● Further suggesting foul play, I was verbally informed by the Supervisor of Elections staff that 50 ballots cast by mail in the District 2 council race were rejected due to a signature mismatch, a figure that accounts for just under 6.4% of all absentee ballots returned. By way of comparison, the rejection rate for signature mismatch issues during the 2020 election was around 0.12%, about one voter out of every 833. Using common sense and rudimentary probability, it’s obvious a rejection rate of 6.4% is a statistical near impossibility. The idea that one out of every 16 voters who mailed their ballot back in this North Miami election somehow forgot how to sign their name is absurd. It is impossible to look at this outlier and not call it out for what it is: convincing evidence that there was a coordinated effort by one of the campaigns to sign and handle absentee ballots on behalf of the voters, in violation of Florida law.

“Kevin Burns does not think the rules apply to him. From failing to pay his debts to business partners and little old ladies, to deciding he just wasn’t going to file campaign finance reports, it’s clear he thinks following the law is for schmucks,” said Dr. Hector Medina, “We now see clear evidence that his campaign likely rigged the election in his favor with fraudulent mail votes. This is not just of concern to me and my campaign, but to every voter in North Miami who wants ethical and honest government. We cannot let Kevin get away with this.”