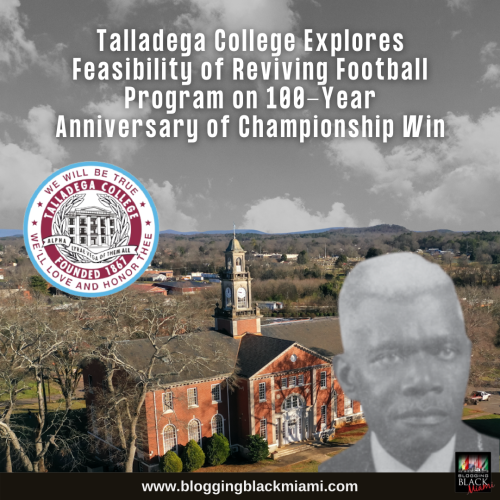 Talladega seized the Black College Football National Championship in both 1920 and 1921 under the leadership of Coach Jubie Barton Bragg. While the institution’s illustrious football program was canceled 80 years ago, during World War II, the upcoming study may help usher in a new era of football for Alabama’s first private historically black college.

“The year 2021 marks the one hundred year anniversary of our historic back-to-back championship win,” said Talladega College President Dr. Billy C. Hawkins. “Given the success of our academic and athletic programs; the recent growth and transformation of the college; and the myriad benefits of having a football program, now may be the time to revive our team. This could be great for the college, the community, and central Alabama. However, our decision will be based upon the findings of a formal feasibility study.”

Dr. Hawkins has extensive experience in bringing back a college football program. During his tenure as president of Texas College, where he served prior to beginning his presidency at Talladega, he successfully restarted the institution’s football program that had been shut down for 40 years. Texas’s football program is still thriving today.

Talladega’s Vice President for Student Affairs, Dr. Jeffery T. Burgin Jr, recently spearheaded a preliminary investigation to determine the feasibility of adding a football program.  His committee surveyed employees and found that an overwhelming majority of Talladega’s faculty and staff are in favor of having a football program. Most employees believe a football team will increase student enrollment and retention; attract donations and sponsorships; and increase institutional pride.

“We are now moving forward with a true feasibility study. Adding a football program will affect community members so we want to hear their opinions. We also want to gage the opinions of our alumni and other stakeholders,” Dr. Burgin stated.

Talladega College Athletic Director Kevin Herod added, “The possibility of adding football would only enhance our athletic program and bring new opportunities to the campus, the community, and the overall collegiate experience for our students.”

Shakayah Midgette, a 2021 graduate who served as student representative to the Talladega College Board of Trustees, stated, “The band would love to actually march at home games, and many students are excited about the possibility of attending football games on campus.  School pride has increased a great deal, and I believe a football team would help it to increase even further.  Football would attract new students as well as sponsors.”