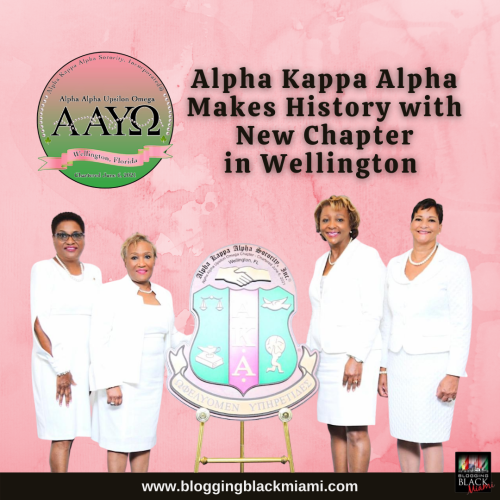 On Sunday, June 6, 2021, Alpha Kappa Alpha Sorority, Incorporated made history with the chartering of a new chapter serving Wellington and the Western Communities in Palm Beach County, Florida. The Alpha Alpha Upsilon Omega Chapter is the first African American organization actively involved with community service in the Village of Wellington.

The South Atlantic Regional Director of Alpha Kappa Alpha, Carolyn Gause Randolph of Columbus, Ga., was the chartering officiant for the ceremony that was held in the Grand Ballroom at the Village of Wellington Community Center. Fifty-two college-educated and professional women are now forever recorded in the annals of the organization as charter members.

Prior to becoming a chartered chapter, this group of women formed the Crowned Pearls of Wellington Interest Group and set out to address needs among the disadvantaged black and brown populations in the Western Communities of Palm Beach for more than a year.

"Our mission is to cultivate and encourage high scholastic and ethical standards, promote unity and friendship among college women, to study and help alleviate problems concerning girls and women to improve social stature, to maintain a progressive interest in college life, and to be of service to all mankind." Chapter President Geneva Pettis-Hassell explained, "We are committed to helping each other and positively impacting the communities in which we live and work."

Despite the pandemic, The Crowned Pearls of Wellington Interest group served their community by hosting and assisting with providing food for healthcare professionals at Wellington Regional and Palms West Hospitals, voter registration efforts, donating, and volunteering with Feeding South Florida food drives, collecting and distributing toys and backpacks. The group also hosted a virtual college fair, supported a fund-raising effort to raise funds for historically Black colleges and universities, and mentored students participating in the Village of Wellington's Students Working to Achieve Greatness (SWAG) program more.

The group's volunteer and community efforts are consistent with the Alpha Kappa Alpha Sorority's Incorporated motto, "Service to All Mankind."

Congratulations Sorors! I may be moving to your area soon and I'll reach out to you all.