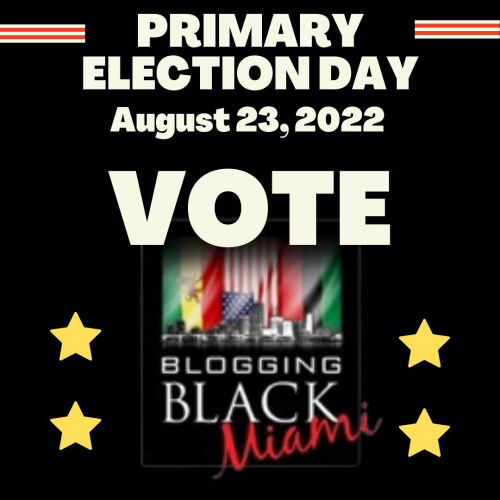 Today is August 23, 2022. It's primary election day in Florida and the race begins to general election day which is November 8. Locally, several key contests will be decided such as the hotly contested House District 109 race between incumbent James Bush III and first-time candidate Ashley Gantt. Also, the judicial race between sitting judge Fred Seraphin and Renier Diaz de la Portilla.  There are also council seats at stake in the City of Miami Gardens.

An obscene amount of money has been spent on races of all levels. If you have been paying attention, you see how this game of politics is ruled by money and some folks appear to prostitute themselves to the highest bidder. The masses have been brainwashed that their vote doesn't matter.

There are more than 1,000 precincts in Miami-Dade County. Find yours by clicking here. Be sure to confirm your voting location because many have changed since the last election. Vote for the candidates that make the best interests and well-being of the people a priority rather than the developers who just want to make money and to special interest groups.

Here is helpful information from the Miami-Dade Supervisor of Elections department:

Remember, if you are in line to vote at 7 pm, stay there until you have exercised your right to vote. Do not leave when the polls close at 7 pm. If you have any questions or experience any problems, do not leave. Call Election Protection at 866-687-8683.