MLK Youth Symposium to explore the role of youth in activism 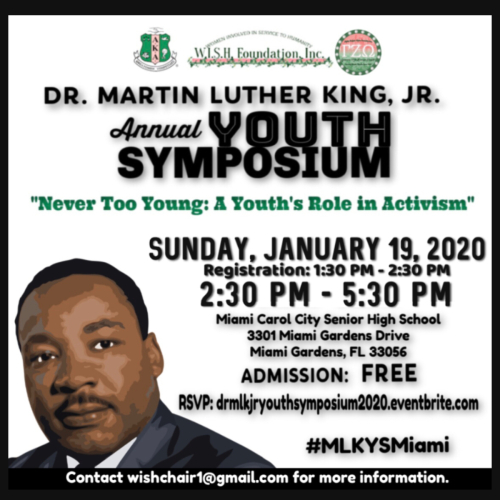 This is the ninth year of this annual gathering of youth from throughout South Florida in honor of the Rev. Dr. Martin Luther King, Jr. The theme is ”Never Too Young: A Youth’s Role in Activism”. The event is designed to empower young people to activate Dr. King's teachings to address modern day issues confronting our community, country and the world.

Schools, students and parents can prepare for the summer break by participating in this challenge to have students read. The 2012 Summer Literacy Adventure is geared to help children stay on target, motivated and excited about reading and literacy. Don’t allow your child to lose learning gains made this school year. During summer vacation, it is important for students to spend time reading and writing on a regular basis whether the student is a beginning reader or a proficient reader.

The 2012 Summer Literacy Adventure invites you to have your students read as   many books as possible. Each student should complete his or her pledge form on the Just Read, Florida! website at www.justreadflorida.com. Following the summer break, the Department will recognize the top ten schools with the highest percentage of participation.

What Every Parent of An Elementary Child Needs to Know: http://info.fldoe.org/docushare/dsweb/Get/Document-6399/dps-2012-70b.pdf(Tat

TALLAHASSEE, Fla. (Nov. 24) - The Florida A&M Women's Basketball team will head
to South Florida for a Monday night court clash with the University of Miami
basketball team. Tipoff will be 7:00 p.m. on the Coral Gables campus.

Florida A&M is off to a 2-1 start so far, with one more game against Alabama
State (Saturday, Nov. 29 at 7 p.m.) in Tallahassee on tap before their trek to
the Magic City.

New coach LeDawn Gibson has led the Lady Rattlers to wins over Albany (Ga.)
State, 64-46 and Savannah (Ga.) State, 48-34, with a heartbreaking 71-69 road
loss at Central Florida this past Friday the only blemish on the record.

FAMU led UCF virtually the entire game, holding a 10-point lead with eight
minutes to go, before the Knights rallied to overtake the Lady Rattlers in the
final minute.

Gibson's crew is leaning heavily on the senior trio of guard Deidra Jones, and
forwards Stephanie Foster and Denise Tate for leadership in the early going.

Jones, a 5-10 native of Powder Springs, Georgia, who averages 11.5 points an 8.0
rebounds per game. is a slashing, guard who will drive the lane in traffic, or
shoot from outside.

Foster, a 6-0 wing player, who is an honor student from Columbus, Ohio, can play
a big guard, or take small forwards off the dribble to the glass, is scoring at
a 7.0 per game clip while pulling down 5.0 rebounds per game.

Tate, a 6-1 native of Cleveland, Ohio, was the second-leading rebounder in the
Mid-Eastern Athletic Conference a year ago, and has become the consummate
rebounding artist for FAMU, averaging 12.5 rebounds per game so far, while
scoring a modest 4.5 points per game.

Other FAMU players of note include Jacksonville freshman Qiana Donald, a 6-0
guard/forward who is averaging 12.5 points and 7.5 rebounds per game; diminutive
sophomore guard Jarquella Woods, a 5-1 sparkplug from Columbus, Georgia, is a
three-point threat, averaging 8.0 points per game; 6-1 freshman guard/forward
Antonia Bennett, a product of Lakeland, is averaging 6.5 points and 6.0 rebounds
per game, plus senior Melissa Daniels, a 6-4 post player from Jasper, Florida,
who is averaging 5.4 rebounds per game.

Senator Obama will be in Miami this week for at least a couple of events. There's a Women for Obama Rally at UM's Bank United Center on Friday morning and a fundraiser at The Biltmore on Friday evening. Tickets for the Biltmore activity start at $1,000 for general admission and the next level is $3,000.

I've been very supportive financially for the Obama Campaign but I have to miss that activity. I am trying to get to the Friday rally but now I'm on the wait list. Arrgh! That's a great sign though because that means the place will be packed with women supporting Obama as opposed to the Republicans' attempt to convince voters that women are supporting Sarah Palin.