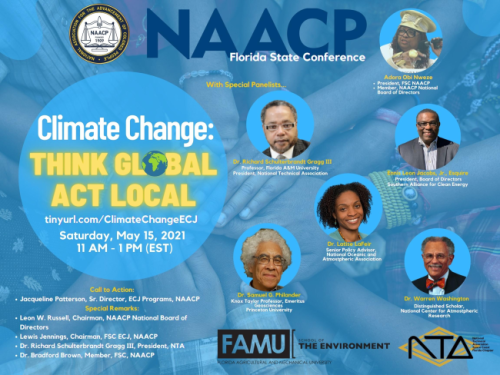 The NAACP Florida State Conference, in collaboration with the Florida A&M University School of the Environment and National Technical Association Space Coast Florida Chapter will present a discussion on the very important topic of Environmental and Climate Justice.

This virtual event will highlight the science of climate change, its impacts, and a discussion on local advocacy and solutions.  It is scheduled for 11 a.m. to 1 p.m. ET on Saturday, May15, 2021.

The 29th edition of the nation’s finest and largest literary gathering, Miami Book Fair International, presented by The Center for Literature and Theatre @ Miami Dade College (MDC), will take place November 11 – 18, 2012, at Miami Dade MDC’s Wolfson Campus, 300 NE Second Ave., in downtown Miami. The always-popular Street Fair runs Friday through Sunday, November 16 – 18, with more than 200 exhibitors from around the country in a festive atmosphere.

Joe Garcia on the oil spill in the Gulf 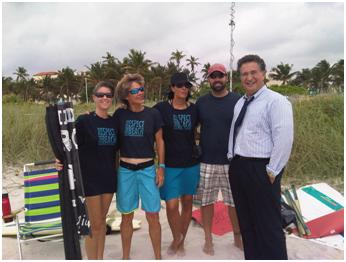 "In light of the recent oil spill disaster in the Gulf Coast, I call upon the Florida legislature and Gov. Crist to proceed with an abundance of caution as the issue of offshore oil drilling is being discussed in the final days of Florida's legislative session and the months to come. We must do everything possible to protect Florida's beaches as this morning we learned the spill is five times worse than previously estimated and greater in size than Miami-Dade County.


"Our waters, coasts and beaches are among God's greatest gifts to us and we must protect them. They are where our children play and local fisherman catch the food millions of American families will eat tonight at their dinner tables. They are also an invaluable source of economic strength for communities throughout our state. Florida depends on its beaches to attract tourists and create jobs and revenues for small businesses. Should one drop of oil, or let alone a slick as large as the one off the state of Louisiana, near our shores, the consequences to the health of both our economy and our families would be devastating.


"My commitment to protecting Florida's lands, water and natural wildlife is firm and unyielding. Hence, I oppose drilling for oil anywhere near Florida's beaches. It's simply a risky proposition that Florida cannot afford. This issue goes beyond party lines, as witnessed in recent concerns raised by Gov. Crist and Republican State Sen. Haridopolos. Our children deserve to play in beaches that are clean and nobody should ever lose their job as a result of an oil spill, especially in these tough economic times. In Congress, I will focus my efforts on developing new energy from clean sources -- like the sun and wind -- that will create well-paying jobs here at home, never run out or put our economy or families at risk."

CBS4 AND MIAMI METROZOO TEAM UP TO FIND STUDENT ECO-HERO