Miami Football in the Spotlight at State championship games

The Miami Central Rockets travel to Orlando for the  6A State Championship game at 1 PM today in the citrus Bowl in Orlando. The Rockets, reigning champs will line-up against the number two team in the nation, Seffner Armwood, for the title. Both teams will play with the eligibility of a player being questioned. The state high school sports officials will make a decision after the season is over.

In the meantime, Miami is already proud of the 5A championship title captured by the Miami Norland Vikings over Wakulla in a stunning 38-0 victory yesterday. Congratulations, Norland!

Congratulations to the top-ranked Miami Central Rockets football team on their latest victory over the Hialeah-Miami Lakes Trojans, 63-0. It seems as though this may be the year the Rockets take it all the way to the State championship but let's not get ahead of ourselves. We've seen great Central teams in the recent past that have not reached expectations but this just may be Central's year.

Next Saturday, Central ends it regular season against Booker T. Washington at TPS.

This is a big sports weekend and MSM will not cover some of it. Let's start with last night's nationally televised match-up of Bethune-Cookman and North Carolina A&T in Daytona on ESPN-U. As expected, Cookman slaughtered A&T 67-17 and the Wildcats have already proclaimed themselves MEAC champs and victors over my alma mater, Florida A&M, in the upcoming Florida Classic in Orlando. Speaking of FAMU, it's Homecoming Weekend 2010 and that means lots of folks headed to Tally to see the Marching 100 (At HBCUs, half-time is game time!) and partake in Homecoming festivities.

Locally, the sports focus is of course on the season home opener of the Miami HEAT. LeWadeBosh is front and center in the minds of sports fanatics who love the Dream Team and the Heat haters also. It will truly be a circus with the high profile entertainment and let's hope there are no issues because of the protest of City of Miami budget cuts by police and firefighters. Congrats to local hero, Udonis "UD" Haslem who was named team captain along with Dwayne Wade.

Don't forget high school football as the Miami Central Rockets, my Alma mater also, face some team from Prattville, AL at TPS. Central is one of the top rated high school teams in the USA so that game will surely be watched by fans, sports enthusiasts and college recruiters.

Whatever you choose to do this weekend, make sure you vote in the General Election and be safe out there. 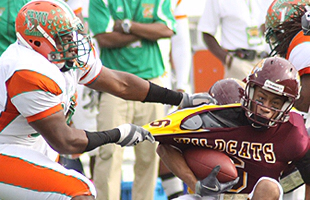 The Miami Herald is running a week-long series on Miami Central High School. If you've read this blog for a minute you know that I am a Miami Central alum. It hurts to see the school, community and students beat down as they have been the last few years.

The school has scored five straight F's. How many times will that headline be splattered in the media around the world? How is a student or teacher to feel attending or working at a school with such a label?

Today's article focuses on new principal, Douglas P. Rodriguez and the challenge he's accepted. Rodriguez, State Principal of the Year 2008, is not a stranger to the school as he started his teaching career there in 1988.