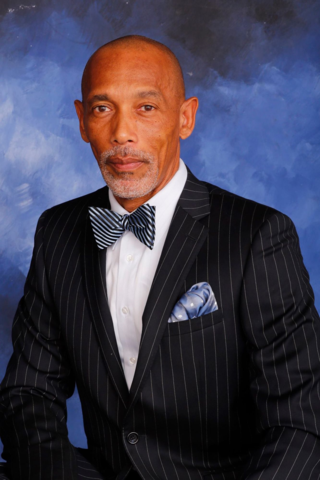 G. Eric Knowles, new President and CEO of the Miami-Dade Chamber of Commerce
What has been rumored for months has now been made official. The always dapper G. Eric Knowles has been selected President and CEO of the Miami-Dade Chamber of Commerce.
His Facebook profile is overflowing with congratulatory messages and comments. As a former Chair of the Board for the Chamber and governmental affairs rep for the Miami Dolphins, Knowles is an excellent choice for the position.
Knowles follows Bill Diggs who left the Chamber to head the Mourning Family Foundation in August of last year. Jesse L. Brooks has served as interim President & CEO while a search was undertaken.
Here's Knowles's thoughtful message from Facebook: 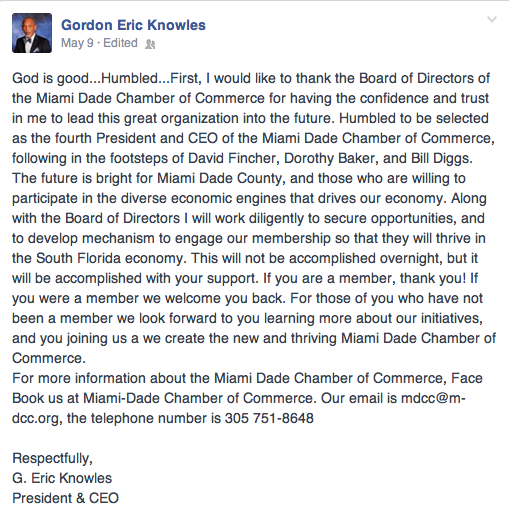 Congratulations and All the Best to G. Eric Knowles and the Miami-Dade Chamber team!

As expected, it looks like the Marlins have made the right connections to get the buy in of black leaders on their stadium project. Commissioner Michelle Spence-Jones got what she wanted for Overtown and the Miami-Dade Chamber of Commerce and the Miami-Dade Branch of the NAACP will announce an agreement with the Marlins at the Chamber's Annual Luncheon tomorrow, March 13.

What we know now is that the Chamber and the NAACP have structured a Community Compact Agreement with the Marlins that guarantees 15% of all construction contracts that equals the Marlins private participation in the building of the proposed Marlins Stadium be set aside for black businesses only. It also guarantees 15% of the ongoing operations of the stadium is given to black-owned businesses on an annual basis.