Word On the Street with Bunquisha Keylolo Brown: Hate Crime in Hialeah...Teach Your Sons Survival Skills

It’s 2012. Life in America is great but some dangers still haven’t changed. Case in point, on January 2, a man left Jerry & Joe’s Pizzeria in Hialeah claimed to have been a victim of an attempted robbery by two African-American males. After investigative work by Hialeah Police, it turns out the victim was really a perpetrator.

The two black males were located it was determined that the alleged victim had been riding up and down the street trying to run over black people. Yeah, you got that right --- trying to run over black people. Anyway, the two black guys didn’t deny the shooting but said they fired in self-defense. It’s 2012 and black men are still being falsely accused of crimes. That’s a damn shame.

Much love to the Hialeah Police because they could have tried to sweep this incident under the rug. So for all you Police haters, recognize you can’t judge a group of people by the actions of individuals.

On the other hand, don't forget this situation could have turned out differently. Black males have to be reminded how to handle themselves in racially-charged situations or in situations where they are confronted by law enforcement. You can foolishly believe the okie-doke that life is fair and there is no prejudice if you want to; or you can do like old school and teach your young people how to handle themselves in different situations.

UPDATE: Be sure to read the Miami Herald article on the incident. The alleged victim, Luis Alberto Gonzalez, now criminal, had the audacity to call Andy Alexander and Tarvis James --- "nigger" and tell them to get out of "his" town (Hialeah). My lovelies, there is so much wrong with that on so many levels.

Gonzalez lied to police about the incident. He also said the two young men appeared "arrogant". Hmmm...arrogant...Haven't we heard some people use that term to describe President Obama? Let's be real, we know that's code for "uppity negro". It gets worse when Gonzalez said he resented blacks because of a crime against him during the McDuffie riots. The McDuffie Riots? Wasn't that like 1980? Wow. The young men didn't report the incident because they were afraid they wouldn't be believed --- another sad but true reality of life.

Will Frederica Wilson change the 'no hat' rule in DC? [POLL] 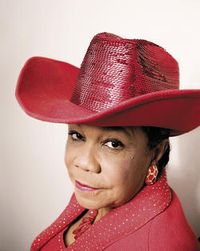 Frederica Wilson is headed to Congress as the elected representative for Florida’s District 17. She beat out a slew of candidates for the seat and continues to do what she has always done --- shake things up. She’s jokingly referred to as The Mad-Hatter in some articles because of her penchant for wearing hats. Unfortunately, or maybe not, for Wilson much media coverage has been devoted to her desire to change the rules and wear her signature hats in the House chamber.

There are two camps of people on this issue: one group fully supports Wilson who calls the current rules sexist and there are the other folks who find the hat wearing issue a ridiculous waste of time. Either way you look at the situation, Wilson is one of the best-known members of the congressional freshman class. Perhaps there really is no such thing as bad publicity.

Wilson was successful at changing the no hat rule at the State level; will she be able to do the same in Washington, DC?

Frederica Wilson - You Can't Leave Your Hat On