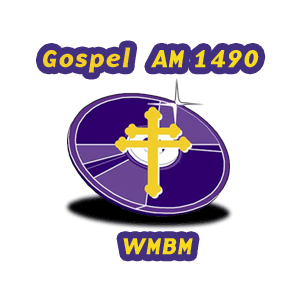 Tonight at 9pm EST, Eric Pettus will guest host The Chief Jimmy Brown Show on 1490 WMBM. To listen, go to the web or download the app. 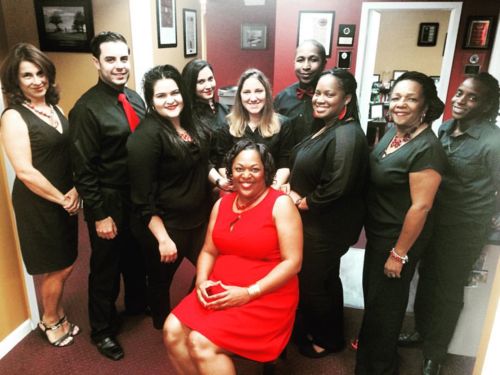 Kitsia Gaines has been tapped again to deliver State Farm “Financial Education Minutes” to the more than seven million listeners on the Steve Harvey Morning Show. Listen live online on Thursdays at 9:05 a.m. ET on iHeart Radio; you can also access previous recordings.

Gaines shares tips on a range of financial topics including budgeting, saving, and buying a car and/or house. She will be featured until December 24.

Her professional experience and accomplishments include more than twenty years with State Farm; Million Dollar Round Table Qualifier; and National Association of Insurance & Financial Advisors. She’s also a graduate of Florida A&M University; member of the Rotary Club of South Miami; Miami-Biscayne Bay (FL) Chapter of The Links and Delta Sigma Theta Sorority.

After a brief hiatus, the Rev. Dr. Jimmie Brown returns to radio with the debut of "The Chief Jimmie Brown Show" on the award-winning 1490 WMBM starting Sunday, February 1, 2015, 11:00PM -1:00AM EST. Chief Brown is a multi-talented host, author, pastor, retired law enforcement officer and war veteran.

After hosting "Hot Talk with Chief Jimmie Brown" for more than 25 years and posing a black history question to the listening audience of his weekly talk show, how appropriate that Chief returns on the first day of Black History Month. The Chief Jimmie Brown Show will offer listeners a fresh take on issues affecting the community – from politics, business, education, history, youth and community empowerment issues.

There are several ways to tune in to The Chief Jimmie Brown Show each Sunday night: listen on your radio at 1490 AM; streaming live by computer at www.wmbm.com; or via the WMBM mobile app which can be downloaded from iTunes and Google Play.

Call-in numbers for The Chief Jimmie Brown Show are: 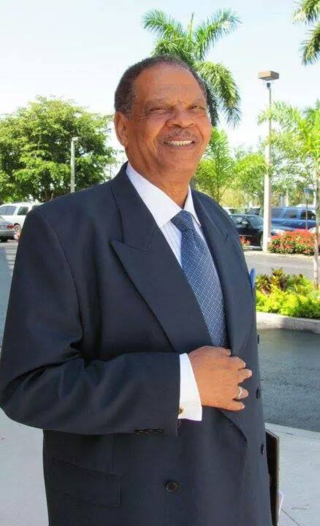 Citing budget cuts, Chief Jimmy Brown is out as host of Hot Talk on WHQT Hot 105 FM. James T. has been tapped as the new host. Still no word on why Chief was released now when changes are not effective until January 1, 2015. No, accrued leave time is not an issue here.

The word is out that Hot Talk host Chief Jimmy Brown will no longer be on the air as host on WHQT Hot 105. He might be on tonight to say farewell to his listeners and then perhaps he won’t. It is obvious that something is up since Chief’s announced exit was for late December of this year. Now we hear that his dismissal was effective immediately. All of this brouhaha is very sad, as this is Chief’s twenty-fifth anniversary hosting Hot Talk and his show was definitely an asset to the community. Unfortunately, Miami radio legend James T. is caught up in the mix of this mess as he is slated to take over the Hot Talk time slot.

The various reasons for Chief’s abrupt exit, either forced or voluntary, seem questionable, at best. Many of Chief’s loyal listeners and followers have taken to Facebook to voice their disagreement with the decision to release Chief. A call to action has been issued for listeners to contact VP/General Manager Bob Rabin and Branding/Program Director Phil Micheals-Trueba via phone call and email to keep Chief Jimmy Brown on the air. The real question is, if given the opportunity, would Chief Brown even want to return to host the show on Hot 105.

Here’s what some folks have posted about Chief’s exit: 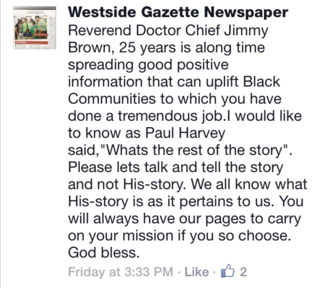 Change is not usually easy for most people. Perhaps this decision will be the best for all involved. It might be a better fit if Chief took his show to WMBM. Think about it. WMBM is already one of the few opportunities for the community to share information and get educated about important topics.

The community definitely needs an opportunity to dialog and voice their opinion on various topics of interest. Chief Brown was definitely one who allowed the public access to his show. In the true purpose of a community service show, none of Chief's guests were charged to appear on the show nor did he hit them up for funds on the side.

Where the community goes from here is up to the community. Each time effective communication is cut off, the community loses. We saw it happen when Tavis Smiley left the Tom Joyner Morning Show. We saw it when Michael Baisden’s contract for his show was not renewed and here we go again with Chief Jimmy Brown of Hot Talk fame.

James T. is no stranger to radio nor to the talk show format. Let’s see where his show takes us. I'll be listening tonight at 11, will you? Peace.