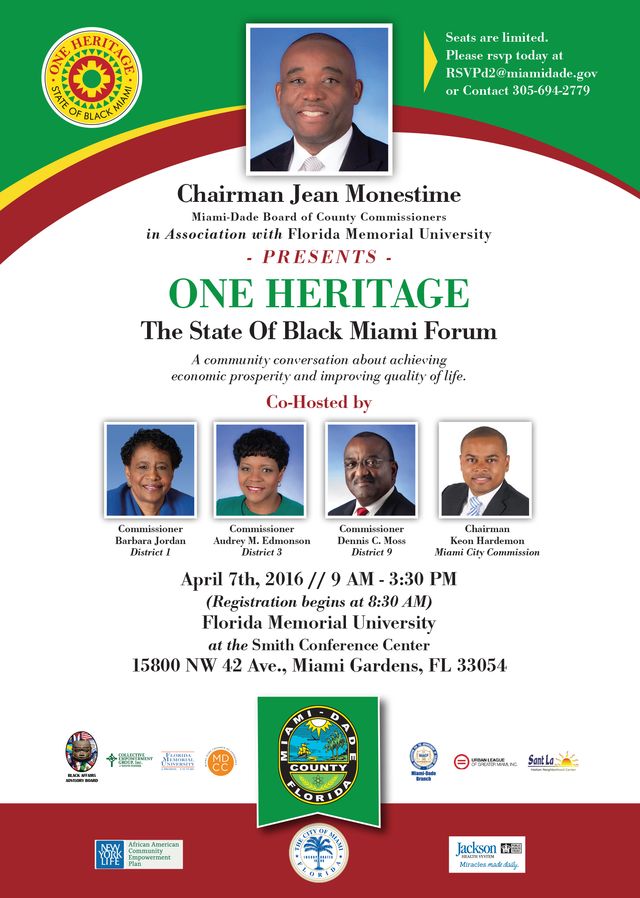 This activity is long overdue. If applied and executed with genuine concern for the potential of the collective rather than other individualized agendas, this could be the tipping point for realizing advancement of blacks throughout this community. Hopefully, assignments with deadlines and follow-up will result from this conference. There have been far too many forums in this community that have largely only been opportunities for residents to vent frustrations.

Please make every effort to participate in “ONE HERITAGE: State of Black Miami” if you are concerned about the current and future of blacks in Miami. 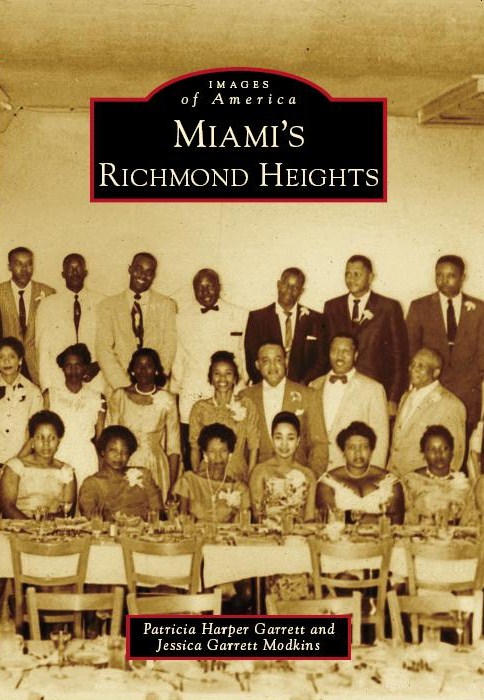 "The Heights Got Talent"

Open to the Public

Help commemorate the school’s 50th anniversary by purchasing a brick.

FREE TO THE PUBLIC

An afternoon with the authors and original community residents. See original documents and more.

Community Symposium on the legacy of Richmond Heights, 12/28/2013 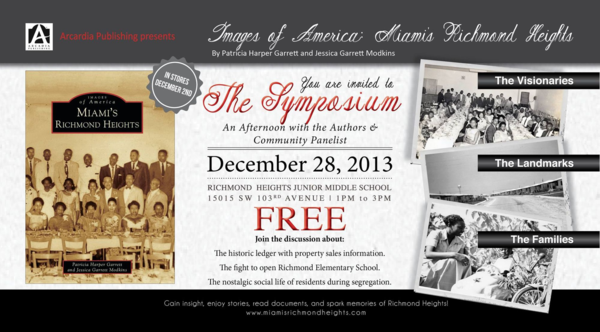 Miami, FL__On December 28, 2013 the community of Richmond Heights will come together to discuss their heritage in a symposium style discussion.  It willbe a candid discussion on the history of the Richmond Heights community and its impact on Miami, Florida as it was captured in Arcadia Publishing’s book, Images of America: Miami’s Richmond Heights by Patricia Harper Garrett and Jessica Garrett Modkins.

Several scheduled panelists include Tuskegee airman and original resident; Eldridge Williams, World War II veteran and original resident; Eugene Williams, Laura Ann Palmore, wife of Florida’s first Black United States Postmaster; Anthony Palmore, and other notable community stakeholders.  The event will take place on December 28, 2013 from 1 pm to 3 pm at Richmond Middle School, 15015 SW 103rd Avenue, Miami, FL 33176.  “This school is proud to open its doors for such a historical tribute,” said school Principal, Kristal Hickmon.  “There are many things that the community should be proud of and an event like this is way over due.”
Symposium topics include:
·  Why would a White man in 1949 build a community for African Americans?
·  Why were Black people drawn to the community?
·  What was President Harry Truman’s involvement?
·  What was life really like during segregation in Richmond Heights?
There will also be an exhibit of historic documents and photographs from the early settlers of Richmond Heights taken from the book, Images of America: Miami’s Richmond Heights.  Modkins, co-author, will facilitate the symposium.  “After interviewing over one-hundred residents for the book, it will be great for the community to hear the passion behind the move and journey to Richmond Heights in their own voice,” said Modkins.  This is a free event opened to the public. Co-author, Garrett added, “We expect to help people understand the significance that this community has played in the history of Miami.“

With extreme sadness we announce the transition of the legendary Rev. John A. Ferguson. He founded Second Baptist Church, one of the largest black churches in South Florida.

At the Miami-Dade County School Board meeting of August 23, 2000, he was memorialized by the naming of a school in his honor. This is how he is remembered on the website of John A. Ferguson Senior High School, Home of the Falcons.

Reverend John Alphonso Ferguson was born on July 23, 1923 in Miami, Florida. He graduated from Carver Senior High School in 1941 and served with the United States Navy for twenty-one years during World War II and the Korean Conflict. Reverend Ferguson is a graduate of Union Theological Seminary (1954) in New York City and Virginia Union University (1947) in Richmond, Virginia. He and his wife, Anita, have five children (three boys and two girls).

For the past thirty-one years, Reverend Ferguson has dedicated himself to the Second Baptist Church in Richmond Heights, which he founded in 1964. In addition to leading his growing community of parishioners, he has served to unite the multi-cultural population by serving on the Community Relations Board of Metropolitan Dade County. This board played an essential role in keeping the peace during the Liberty City riots of the 1980's, and the bringing of necessary resources to the community in the aftermath. The relationship between the different races in our county has had few moments more tumultuous than when Federal Judge Clyde C. Atkins ordered the desegregation of all public schools. Reverend Ferguson's leadership skills were tapped once again to serve on the School Desegregation Committee and assist with desegregation of all public schools.

Details of his Homegoing celebration are incomplete at this time. Rest in Peace, Rev. Ferguson.